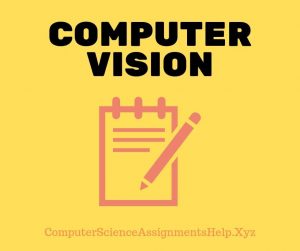 usands of images are captured every minute, there is a huge amount of data available in the form of an image. To extend data sciences and artificial intelligence to images, a computer must be able to read and understand an image. Image processing requires inter-disciplinary techniques. Computer vision is a combination of machine learning and artificial intelligence.Computer vision just like human vision can be described as the ability of computers to understand, perceive and differentiate between images. With the advancement in the image processing capability of the computer, it is now able to recognize different objects and pictures but still, there is a large room for improvement [7]. A human mind analyzes an object from its shape, size, and line while a computer visualizes an image differently by reading the colors of an object. Even today after the struggle of decades, a computer cannot detect an image accurately just like a human. The computer has not been able to read a picture because humans have not understood the detailed principle of human vision. If the uniformity between the detected object and background is low, then a computer can analyze the object accurately but in the case of high uniformity, it is difficult for a computer to differentiate between the object and background. The computer reads a picture from a camcorder or a digital camera and then divides the whole picture into an array, and a single element termed as Pixel. Higher the number of pixels, the higher the clarity and resolution. Each pixel has its intensity and color. The processor then measures the intensity of each pixel to form an image. The machine measures the intensity of pixels one by one. A human analyzes a picture in three dimensions while the computer plots the picture on a 2-D graph. The image processor digitizes the image by modifying the intensity range between zero and one, where zero corresponds to black and one to white. A grayscale image contains two colors only while a colored image has three more colors; red, blue and green, all the other colors are formed through the combinations of these three principal colors. An array of the colored image has three times more elements than that of a grayscale image.

One approach to read an image is through segmentation. An undirected graph is developed in which each co-ordinate has its own weight. Weight is the measure of dissimilarity between different pixels. It is obvious that neighboring pixels will have low degree of difference. Computer vision is trained by inputting a large number of images into computer such that the machine becomes capable of recognizing different patterns and shapes. Computer vision also takes help of Fourier analysis through which the intensities of pixels can be plotted as a function of frequency.If the magnitude of difference between the intensities of pixels is significant then the frequency associated with the image will also be large. Otherwise, if the intensities are relatively uniform, then there will be lesser frequency content of the image.